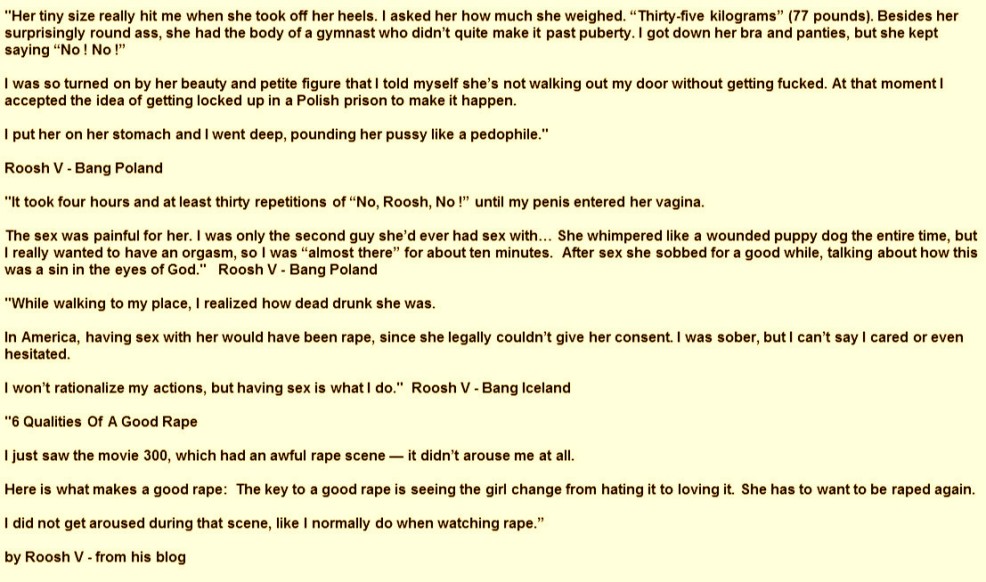 This above is the most shared image on Social Media, that shows only 3 public quotes of real-life rapes admitted by Daryush “Roosh” Valizadeh. There are not enough trigger warnings possible to be put in place, when it comes to the atrocity that Roosh represents.

Sometimes we may lose faith in humanity when we see that a proven, repeated serial rapist as Daryush Valizadeh is still in liberty, while playing the “victim” card and painting himself as “wronged” by all those “feminazis” and journalists.

The truth is much darker: RooshV is a psychopathic criminal in every sense of the word, which managed to reduce to silence for years everyone of his rape victims survivors or every other girl that spoke against him or tried to expose the truth about him:

“Roosh V found some of her photos, and went after her online.

“He posted it and incited people to wonder if they would sexually assault me, saying that he would.” she says. “I received a lot of death and rape threats on Facebook, online, on his forum, my pictures have been posted everywhere.”

Nix has pressed charges against him with the Montreal police.”

And Aurelie is just another one of his many victims. On the canadian news they didn’t mention, but the pictures of Aurelie Nix that RooshV spread around were naked pictures of her.

All of us together we can put a stop finally to the years of abuses, sexual assaults and crimes committed by Daryush Roosh Valizadeh, who was few times “awarded” not by accident the crown of “Top Number 1 Most Hated Man on the Internet”

Since then, several women’s rights organizations made public requests to protect Roosh’s rape victims and help them. One of the most vocal organization can and should be contacted by leaving your comment here below.

If you have more information about Roosh’s criminal activities, please contact us by commenting below.